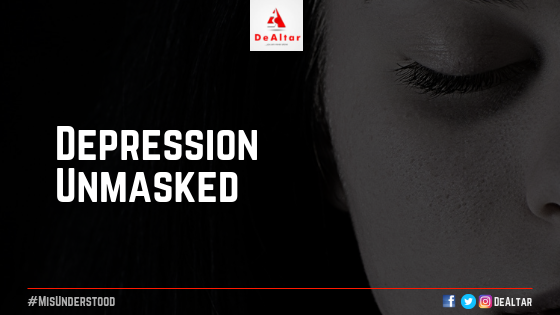 Even when I saw signs for myself, signs – though subtle masks behind which depression reveals itself, I disregarded the fact that I could ever be depressed. I hated to admit that this young lady was another victim of Mr. Depression. Being born and bred in Nigeria, a country where mental health issues are often ignored or covered up because of an imagined fear of shame and stigma which people strongly disapproves of, it is often harder to seek help. And the risk is yet on the increase.

About a million people die each year due to suicide and among the list of the factors is depression. It is estimated that 300 million people worldwide suffer from depression and it is the leading cause of disability worldwide.

According to a research by World Bank’s Mind Behavior and development unit, one in five adults suffers chronic depression in Nigeria.

Check This Out:  Suicidal?

Depression is not a sign of weakness, it is a well recognized disorder that responds to various treatment programs. Though, it is always difficult having to talk to someone about it especially when you have to take the first step, we hope to create an environment where we can feel safe to speak out and seek help rather than suffer in silence because the key to unlocking the door is getting help- and help will come when you ask for it.

Often misunderstood and missed signs of depression include;

Do you feel tired even after long hours of sleep? Sleep seldom relieves the fatigue and energy saps that comes with depression. When you sleep for long hours or get enough sleep according to your measurement of right proportion and you feel tired, depression lurks in the corner.

Check This Out:  Misunderstood By Victoria

Having great difficulty in falling asleep or going back to sleep after waking too early– Insomnia is also a common occurrence for depressed people.

Do you feel persistent pains that have no cause?

People who are depressed often suffer persistent head, stomach, back and body aches that does not seem to have a cause.

Depression abducts appetite, causing its victims to lose weight but in rare cases, the reverse happens, appetite shoots and victims add on a lot of weight.

While mothers could be champions at worrying, depression can make itself known through this subtle sympathetic and caring feeling. Constant worry and anxiety, concern over matters, Phobia(exaggerated fears ) are also signs of depression.

Check This Out:  Trekking From Ikeja To Agege - My Road Experience

Some of these signs were evident in my life and I was opportune to attend a workshop where we talked depression and that was where illumination began.

While some certain occurrences could be fountains from which depressions springs forth, sometimes depression can occur when things are going well.

We should not be caught ignorant of the faces of depression, let’s get it unmasked, let us create a community where we can talk about it, let’s find illumination in a world where depression darkens our days. Help stands on the other side (talk about it, get treatment..) let’s reach for it!