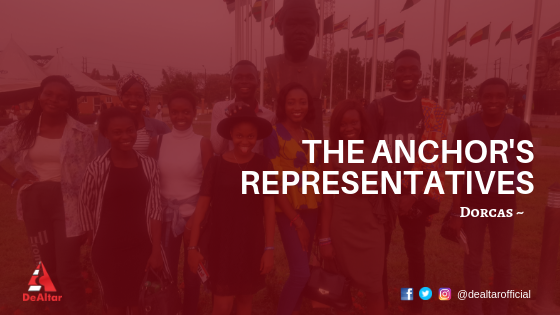 This is what my to-do list would look like if I suddenly had to represent the president of Nigeria for a short period of time. What would yours look like?

Merriam Webster in her dictionary gives a synonym for REPRESENTATIVE to be AMBASSADOR which she defines as; “the highest ranking person who represents his or her government while living in another country” and “An authorized representative or messenger”.

To represent is to take on the role of something or someone and to be authorized is to be given power or established as an authority.

An anchor as defined by the same source above is a person or thing that provides strength and support, and a large store that attracts people and businesses to a particular area.

Who then is THE ANCHOR’S REPRESENTATIVE?

He is someone who has been or is empowered with all power and established with authority to take on the role of providing strength and support to people as well as attract people to the anchor’s place of abode.

Check This Out:  Suicidal?

Little wonder the Bible in the first book of Peter refers to us as “a peculiar people, a royal priesthood, a holy nation and God’s own people” and in the second book of Corinthians refers to us as “Christ ambassadors”.

I find this exciting actually, suddenly the reality dawns on us about who we really are, Ambassadors and what our purpose actually is, to represent our country and her president in this world.

According to Wikipedia, ambassadors protect their citizens, protect the interests of their country always, support their country’s prosperity and work to achieve peace in and for their country. This and so much more are the duties of the anchor and likewise his representative.

This begs the question, how well have you been performing your duties and ambassadors and representative of Gods’ kingdom? As people often say “hope you are representing?”

The realization of this brings to our consciousness what we ought to do, how we ought to speak, who we ought to be to people, what our goals should be and so many others. It is about time we realigned ourselves to our purpose and mission.

Oh! a little interest fact. I watched a movie a while back where some people were after an ambassador, they wanted to hurt him at all cost because they felt he had somehow wronged them but guess what? they could not, not because he paid them off or went into hiding but rather it was because he had an impenetrable blanket of protection over him for as long as he was an ambassador, it is called Diplomatic immunity.

Check This Out:  Is There Hope In Man?

Not only are you empowered as an ambassador, you are also shielded from every and any form of hurt.

I have heard stories as well of how Nigerians at airport checkpoints when about to travel out of the country are usually checked, rechecked and rechecked even bothering at the point of harassment.

My theory on this is that they are acting based on past experiences, over times Nigerians who have travelled out must have displayed some forms of misconduct and this is what has now been associated with Nigerians, hence the thorough checking. If the ambassador of Nigeria to America goes over there and misbehaves, he will not only have soiled his name and reputation, but that of his country as well as his president, giving it an image it does not bear, a wrong image.

In other words, the job of representing is not a small one, it is very delicate and important.

However, the anchor has not only deemed us capable of representating him, he has deemed us worthy of representing him and he also trusts us to rightly and justly portray him. Such height of trust!

Check This Out:  Is There Hope?

It is important to know that in order to properly represent a person, you must have a good knowledge of the person, who he is, what his vision is, his character, likes and dislikes and everything that relates to the person. In the movie industry, before acting a role out, prior studies of that role is done in order to rightly represent that character. After all, how can you act the role/character of a Doctor or lawyer if you aren’t one without first shadowing one?

Who is the anchor to you and what does he mean to you? How well do you know him? These are some of the questions you have to answer if you will rightly represent your president and country.

As representatives of the anchor, we have therefore been tasked with a task, OCCUPY TILL I COME. The anchor started something beautiful and has now asked that we represent him here on earth, continue in this beautiful mission and vision of his, stand in his stead and do that which he would do.

Now then that you have been called to represent the Anchor, what does your to-do list look like and how well have you been performing?

I do not know about you, but if I had to represent Nigeria’s president for even a day, I would give it everything and so much more.