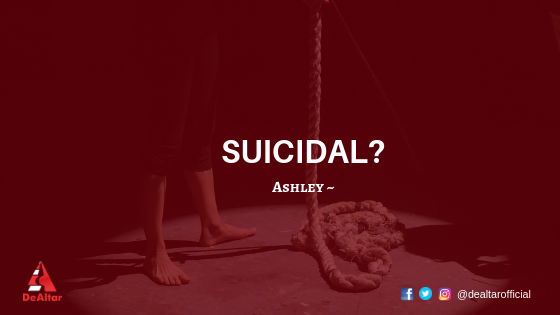 She prefers to stay secluded from everyone and reality. Isolated from the real world she remains.

Her fantasy became her reality, the world that felt like it was for her, where life didn’t have to be so stressful, where all you wish you had you could get.

Check This Out:  Why Young People Commit Suicide By Vicky

She found such negativity so suffocating she relied on her dreams forever, or so she thought. Little did she know that her fantasy was merging with reality. She couldn’t control both worlds, everything was a mess, she was running so much from reality she didn’t know she had affected her fantasy.

Nowhere was safe for her anymore, she couldn’t take it for a second longer, the thoughts that had continued lingering in her mind eventually came to light.

In a dark room she laid, with a note in her hand, it was time to go to school, her mum had been knocking since, she was scared, she hoped it wasn’t what even was thinking, she never listened to her daughter, she was never there, she felt it was her fault. If only she had listened, if only she had signed her daughter for therapy then everything would be alright.

Check This Out:  YANA