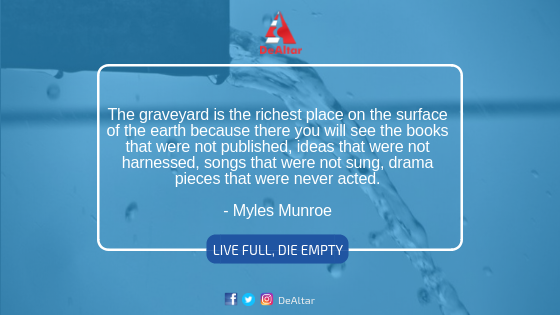 This quote did not make so much sense when I first heard it.

The congregation was asked; what is the richest place on the planet? Some spoke in terms of available resources in certain places; rare gems in Africa, oil wells in the middle east, hard currencies in the west and many more. But the answer we would get was rather unusual and unexpected.

The least place you would think of is where it seems like nothing exists. But in nothing, so much could have been.

In the beginning, the earth was formless and empty. It seemed capable of producing nothing. But in a matter of time, the formless and empty earth produced life. This proves that nothing can produce something. So, it should really not surprise us that the richest place on the planet is the graveyard.

Note though, we are not limiting it to the cemetery made for the rich and powerful. They are just as rich as the dump full of decomposed dead bodies, some of who never got proper burials. So it is not a function of who the person was while he or she lived, but who the person could have been in his or her lifetime.

Check This Out:  The Great Resolve For A Great Nation

There are three kinds of people who live;

Those who live full and die full:

They acquire so much in life, learn so much, blessed with so much, they are called bundles of gifts but they die with all they acquired in their lifetime. They die with the gifts they had, the ideas, the dreams, visions and all they lived their lives wishing they could do. These are the people that have millions of ideas in their heads but never start any. They live in fantasy, what could have been, but never touch reality. They have dream books in their numbers, but that is all they really achieve – a compilation of amazing dreams caged in the pages of books. They watch people fulfill the dreams they had years back; while some live in regret, others criticise, saying they could have done it better. Well, why didn’t they start it when it first came in their minds. When they die, they go to the grave with more questions than answers; maybes, what ifs and so on. They live full and die full.

Check This Out:  Intentional Friendship

Those who live empty and die empty:

First of all, I do not believe any one born of a woman is born empty. We all are born with great potentials hidden within us, waiting to be explored. However, for some, they never do anything about it. They never dream. They are like paper against the wind, going where the wind takes them, with no will of their own or direction or self worth. And when they die, they go to the grave like a sojourner who went through a path without even a footprint to show that he or she walked that path.

According to Myles Munroe, the greatest tragedy is not death; it is life without a purpose.

Those who live full and die empty.

This in my opinion is the ideal life. Full of potentials, dreams, visions and pours everything here on earth for the benefit of all and sundry. And at the end can say; It is finished; I have given all, time to rest. Such people live their dreams, touch the world with their lives, leave markers for all to see that they walked the face of the earth. Well, maybe not all, but someone did see and felt their presence and impact in his or her life. We are like cups filled to the brim and presented to the world. Don’t give them a sip, a taste or a gulp; empty yourself and go back to the One who gave you to the world with the testimony that you delivered the message you were sent.

Check This Out:  World Diabetes Day 2018: Food Cure For Diabetes

We are messengers. Messengers carry the message of the One who sent them. Failure to deliver the message will result to a waste of resources. And no being likes to waste resources.

So, live full, constantly developing yourself, learning, refilling, emptying and refilling until you know you have given all, and at the end, with a smile on your face, you will go to rest fulfilled.