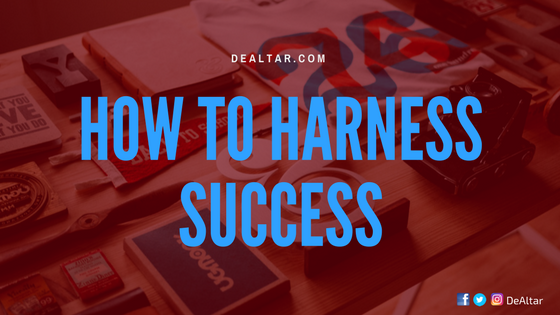 The amazing part of success is this; those who fail to succeed too did dream of success. And how did they fail? Staying at the dream realms! – The realms where dreams are never materialized. They only dreamed about it. They didn’t even dream about what they want to be successful at but they dreamed success!

What Successful People know is how to harness success!

Success by itself doesn’t seek people, neither does it wish to be found. You must seek success till it is found and when eventually found, it hates to be harnessed.

Check This Out:  15 Habits of Successful People

What really is Success and what does it mean to harness?

Success: the accomplishment of an aim or purpose OR the good/bad outcome of an undertaking [Archaic].
Harness: control and make us of (e.g. natural resources), especially to produce energy = put to use.

It takes steadfastness to harness success, and below are some cords or ropes to be used:

It’s been researched that those who set goals and follow them through succeed faster than others. It takes a few minutes to set a goal and write it down, but the little action of following them through affects your life forever. It determines if the goal will become a gold or a ghost! This is the first knot to be tied in harnessing success.

Rope 2: Be confident in your abilities

There’s nothing as destructive as self-doubt. The moment you lose belief in yourself, you automatically lose your hold on success. Nobody would believe in you if you don’t believe in yourself.

When you have a goal, it is essential you stand by it unshaken, unmoved, with absolute resolve. When you try to bind success with this cord, it throws everything it has back at you. Temptation, indecision, procrastination and the likes just for you to yield to its own cord – stagnancy! Even the bible says,

Hold on through determination!

Rope 4: Study the life of those who had harnessed success

Some notables(Persons) had bound success at one time or the other in their respective lives. A Yoruba adage roughly translated says “you can’t have someone who drinks orange and you end up taking the sour one”. Learn from them and success mysteries would be unraveled to you! You can’t bind what you don’t know about!

I will have to do it later

If that’s your ever-present slang, you are as far from harnessing success as a lame man is from winning the Olympic race. Procrastination kills destiny! You can never bind success if you always store everything in the future or in the bank of later. A popular saying says, “procrastination is a lazy man’s apology“. Tomorrow might be too late, hold your ground now and do it today, you might in fact catch success unaware.

This is the strongest and most important rope to harness success with. You can outrightly do nothing without the pioneer of success, even the bible states “without me ye can do nothing” [John 15:5].

When you submit to God you outrightly harness and utilize success. God is the center of life! He holds the world, earth and heavens…. Life! The bible tells us what we will enjoy when you submit to God; “I will anoint thee with the oil of gladness even above thy fellow” [Psalms 45:7, Hebrews 1:9]

Check This Out:  You Had Better Failed Than Never Tried

Gladness is a realm of harnessed success. The all-knowing God awaits your submission to him to lead you there.
Submission to God in this context is the resultant effect of your Love for God than success. How? The scripture above says ‘thou hast love righteousness, and hated iniquity; therefore God, even thy God, hath anointed thee with the oil of gladness even above thy fellow’. It is thy God not Our God that anoints you with the oil of gladness.

It is funny how a lot of people want to love (not submit) to a God for success. Without God, you might get it right sometimes – this is called luck! You can never be successful in the context of success without God. It is God that makes all other ropes and cords glue thereby harnessing success. God is the center of life and all ropes and cords will be tied around God to yield success.

Now, when you bind and harness success with these ropes and cords, it has no choice but to work for you. Yet you must not let your hold on the ropes slack or else you lose success. Like a force of nature that despise capture, it will always seek a way to escape, even if through the tiniest avenue. Nothing in Life happens by itself, Success must be harnessed (bound) for it to stay!