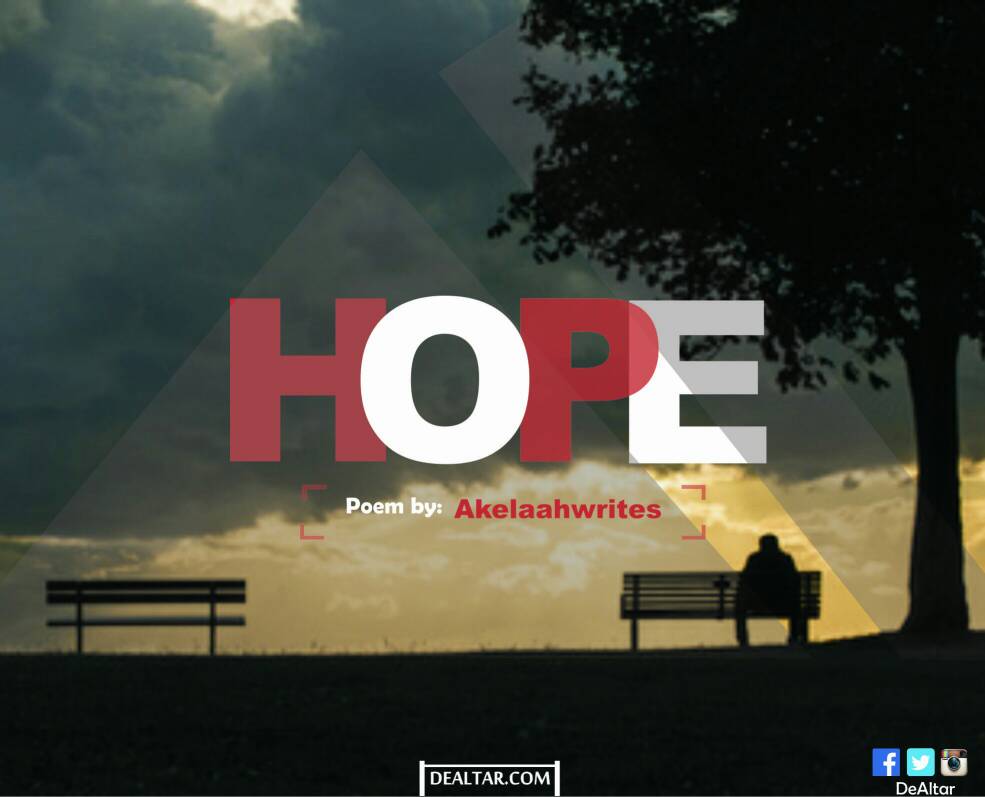 HOPE
Four letters everyone at a point has hung on to for intervention in their respective life crises.

What do I know about hope?

I won’t define it.

Instead, I’ll captivate you with a short story about 3 different people from different walks of life who had an encounter with hope.

A boy is seated under the moonlight thinking about his life. He is deep in thoughts, rummaging on his future. Right now, everything is bad for him and his future seems bleak. His parents can’t afford to send him to the university. He’s in distress crying his veins out. He’s regretting his sleepless nights. In pain he reminisces the days he spent his last penny on coffee so he could stay up during the night to read. He’s balling out his eyes as he remembers how he dumped his girlfriend just to concentrate on his exams. He’s despising his parents and cursing them for being inadequate.

While he’s in this anguish, there’s another man standing on a chair with a noose around his neck. He’s about to kick off the chair and leave his body to the mercy of the rope. He’s having a last minute thought, a last minute flashback of his life. He remembers how his 9 years old daughter had died three months ago from cancer. Soon his mind wanders off to a beautiful young lady running around in a garden as she holds her skirt above her knees. She was his wife. This image only breaks his heart further because she had died two days ago from the heartbreak of losing their daughter. She had looked more like their daughter with each passing day before she died. Her skin was pale while scales were forming, her lips were scabby and her once beautiful sky blue eyes were hollow and emotionless. He had watched helplessly as she deteriorated just like their daughter. Now they were both gone and he is alone. But he’s about to remedy that.

Some streets away from this man is another lady. She’s curled up in her bed. Her sheets are stained with a crimson red. Tears of pain and anguish flow freely from her eyes. Few minutes ago she was raped by her uncle. This would not be the first time. But in a long time she hadn’t fought back and she decided to do that tonight. That decision only left her in more pain than usual and the blood on her bed only serve as evidence of his cruel act. She swears never to let anyone take advantage of her again.

All these people are going through hardship, pain and anguish. The man on the chair’s much worse. But that’s not how it ends. I know how, and I’d tell you.

Check This Out:  COVID-19: Peace In The Storm

The boy sitting under the moonlight doesn’t get into the university that year. He would get in two Years after and later go on to be a professor. He would build a centre that aims at aiding poverty stricken youngsters with scholarships.

The man on the chair doesn’t commit suicide. At the final moment, he would realise he can’t do it. He would get himself into therapy and later get over his depression. He would later write a bestselling novel about his ordeal. He also would marry a beautiful Lady and together they would have three kids.

The Lady on the bed would run out of the house that night. The bridge would become her home afterwards. She would suffer many days of hunger and bouts of starvation. Finally luck would shine on her. She would be wandering around in search of stale food to quench her unending hunger when she gets hit by a car. The person wouldn’t wait to see if she is hurt as he or she would zoom off. Luck would shine on her as a good Samaritan would take her to the hospital. Within weeks in the hospital, she would get close to the man and narrate her situation to him. He would take pity on her and after she would get discharged, he would take her to his home. Apparently, he is a widower with two grown kids that are abroad. This man would help her and she later would become a big time entrepreneur.

Check This Out:  IT's Only A Matter Of Time

You may be thinking:
‘nice story but what does this have to do with me?’
or
‘what do these people have in common?’.
Well, it’s simple. They never gave up. Even in the midst of life’s struggles and ordeals, they stayed positive. That’s what I’ll want you to do. That’s what we all should do – remain positive.