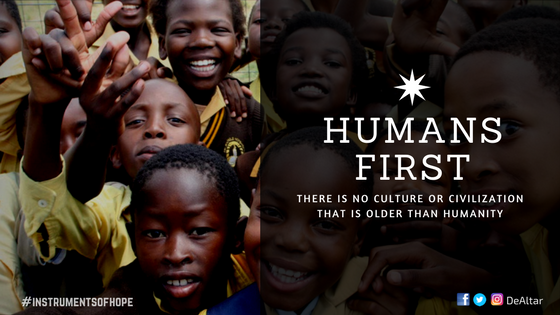 Word For The Week; Humans First

There is no culture or civilization that is older than humanity… what makes you a human being is humanity.

My mum has a poultry where she rears fowls and turkeys. This morning, she beckoned on myself and dad to save one of her fowls from being brutally murdered by one her turkeys… When i got there, I saw this huge turkey hitting the fowl with its beak, it went as far as climbing on the fowl, pressing it; there was clear intent to kill. The most amazing part of this incident is that the other fowls went by their normal business like nothing was happening. They simply ignored the fact that one of them which they had grown together with, eaten from the same plate, was at the verge of death by this big turkey. It was pretty astonishing at that point, why wouldn’t they fight for their friend or roommate or at least fight because the victim was one of their kind?

At this point I remembered this statement made by someone I recently met Miss Adenike Oyetunde, “we are humans first“.

Then it made so much sense. What makes us different from animals is the fact that we have humanity flowing through our veins.

Humanity is the quality of being humane. And humane means; motivated by concern with the alleviation of suffering. It is the evidence of moral and intellectual advancement. It is related to words such as, compassionate and merciful.

Well, I feel there are times we forget that we are humans and one important trait of a human being is humanity; care, concern, compassion, kindness. It seems far from it but this is who we really are on the inside. We were created in the very image and likeness of a Loving, Caring, Merciful, Compassionate and Kind Father and as such, we posses these same traits and we need to show them forth.

People are dying everyday, stop ignoring and be an Instrument of Hope to them and you will be fulfilling your purpose that way.

Have a perfectly humane week.

Word for the week