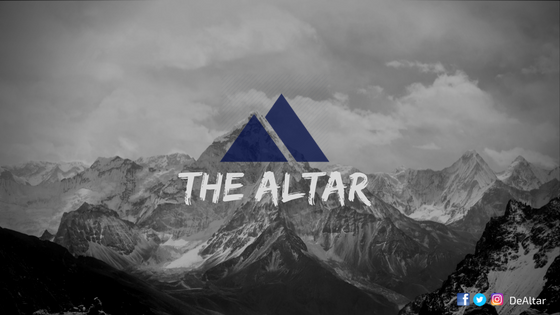 I will praise the lord with all my HEART…

In the dispensation of the laws and prophets, whenever they want to seek the face of God, they erect an altar and make an appeasing sacrifice that turns God’s attention to them, the aroma of the sacrifice entice the presence of God. So we could say, an altar serves as a connection between Humanity and Divinity.

An altar could be a state of fellowship. When man erects an altar, the presence of God is invoked. An altar is a meeting point between the supernatural and the natural. A state where man ‘comes up on’, God descends, worship is made , sacrifices are offered and covenants are established. An altar is not fully physical nor fully spiritual, its represents the both. So it has the ability to bring down the celestial into the natural and takes up the Natural into the celestial, a meeting point.

During the time of old, Altars were built, either with wood or stone and always at a particular location. Most times it was either in a temple or an isolated place or amidst a congregation of people. And it is mostly raised. And now in our dispensation, we see every raised platform in our churches as altars. A man could have sex with a lady on a “dais” of a church and nothing would happen for he is not defiling anything, an altar never existed there in the first place. He is only dishonoring a place of honor.

We could look at the story of the sons of Eli in 1 Samuel 2:22-35 they were sleeping with the women in the temple but God anger was kindled when they started tampering with the sacrifices on the physical altar. The astonishing fact is, an altar is never a place. Though every temple needs an altar, not every altar requires a temple. The function of an altar is not restricted to a temple. An altar is not of this world, its not a fixed location, it is not a dais nor a pulpit. It is a meeting point.

Not just any altar brings down the presence of God, just as not all supplications tendered on our altar is granted

The men of old erected altars of stones and wood whenever they need to worship or fellowship with God, because that was how much they understood it. If God had told them that an altar is not a place but a state, I am sure they would have been totally confused and our God isn’t an author of confusion, so He had to relate to them what they could understand.

But in the dispensation of Grace, Grace made us understand what an altar is. Well it was never a place, it is not in heaven, it is not on earth, it  is in you!

And they said to each other, were not our hearts burning within us on the road as he was fully openin the scriptures to us?

The lord told David that He doesn’t live in a house made by hand. So when God in person of the Holy spirit comes upon us and resides, He is actually dwelling in a house ( temple) He made himself!

Check This Out:  The Altar

Most times the sacrifices of praise and prayer we offer from our lips to God are not what gets his attention, but the ones that rise up from our heart. That’s what He sees.

…for Jehovah sees into the heart

No wonder the apostle Paul admonished the Romans in Romans 12:1, “I beseech you therefore brethren by the mercies of God that ye present your bodies a living sacrifice, holy,acceptable unto God which is your reasonable service“.

who may ascend to the mountain of Jehovah…. Anyone with clean hands and a pure heart (altar)

An altar is personal, it is a meeting point between you and God not us and God. During the time of old, they had an altar for the people of God, but yet each individual brings his sacrifice to meet God via a priest. It was personalized. Though the priest would still make a general offering for the entire community, there was always a personal time. Your altar is your business with God. Your altar is different from mine (we operate under different grace) but the offering made on it is to the same God. Thus you approach your altar, meet with God and offer your sacrifices in your own way. Its a personal thing and its more than a fellowship, its a journey!

Man comes with the sacrifice, God comes down with the fire but there is always a meeting point. The altar.