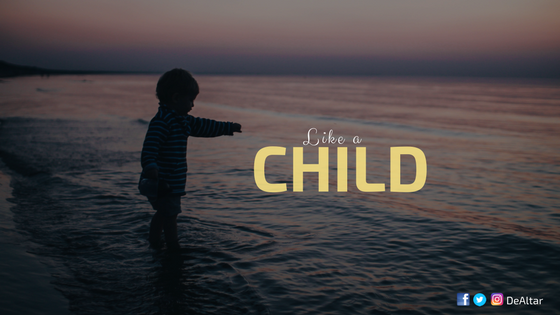 …and said, I’m telling you, once and for all, that unless you return to square one and start over like children, you’re not even going to get a look at the kingdom, let alone get in. (MSG)

Don’t you just love this verse? Would like you to spare 30 seconds to read it again. This was Jesus talking to His disciples about the greatest in heaven, and of all things Christ could have mentioned – wealth, education, years of being born again or any other thing – what did he say? A child!

Except we become as children, it’s a closed deal. It’s quite ironic isn’t it, maybe you’ve been in the faith for years and now the verse says you have to be as a Child again. Why is that? What’s so special about Children? What are the qualities they have that Christ wants us to imbibe?

First and maybe the most important is Dependency. Have you ever seen a child totally independent of his/her parent or of any adult at all? I don’t think so. Children are very dependent on the adults around them asking for help when they need it and even when they don’t. Of course sometimes they try to do this things themselves but come back crying when they can’t.

I remember one day before she left for school, my four years old cousin went to get her backpack from the room. There was a hitch though, the backpack was hung on top of the wardrobe and hence there was no way she could reach it, even though she got a chair or something to stand on. Guess what she did next? She started crying, screaming at the bag to come down! Hilarious right?  But how many times have we been in such situations? When we encounter problems we can’t handle and instead of going to God in prayer, we’re going around doing things that wouldn’t help, complaining, throwing pity-parties and looking for alternative solutions. God wants us to be able to come to Him no matter how we feel or what we’re going through, He expects us to ask for help the same way I expected my cousin to have done instead of trying to get the bag herself. Why? You may ask, well because that’s what Children are supposed to do!

Another quality to imbibe is this unbelievable spirit of trust they have. Children so much believe in their parents, if a child’s favorite super hero is Superman and his dad then tells him he is the Superman, he’ll believe him and actually expect his dad to fly and all that. This reminds me of a story I once read about a child who was stranded in her compound after school because her mum was running late from work, she was tired and hungry so her neighbor offered her some food but she declined saying her mum would be home soon and give her food. She didn’t reject the offer because she wasn’t hungry, she was but because she trusted her mum would be back despite the fact that it appeared otherwise, she waited patiently and knew her mum would come home.