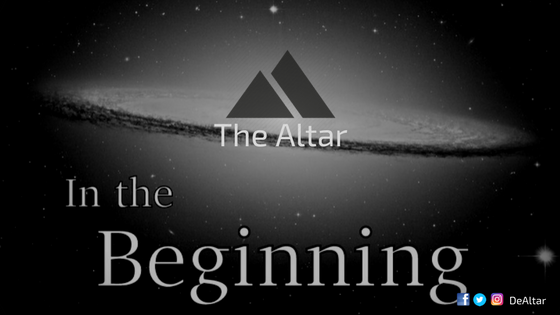 Let’s go back to how it all started. Not much was said about “before the beginning”, asides the fact that it was empty and without a form or order. That was probably the best way to summarize it.

However, a formless and void world was about to be transformed.

Creation was not just about making things that were not, exist, it was about giving life to a dead world. It was all about creating the foundation of life itself.

Everything that exists, exists because, He created them. There is nothing on earth, above or beneath that exists, that He did not create. And note this, there was a purpose for everything He created. It was not guessing game; Life was created with purpose in it. Life in itself was purposed.

Check This Out:  The Altar By Tomidrix

When He said, Let there be Light, there was a purpose attached to it. When He divided the firmaments from the waters, purpose was the bedrock. The plants, animals and finally man; these were all for different purposes relating to their distinct individuals and abilities.

All things are created for His pleasure

The Altar connects us to God but how do we connect with a God we do not know? To get to know Him, we have got to go back to the beginning. The beginning helps us understand the type of person He is, what He has done and how we can relate to Him.

Check This Out:  The Altar - Disconnected

When He asked Man to name all those animals, man named them the same way He would have named them which was why every name he gave them, became their names. Man, created in His image already understood how God thought and acted, creating a better and easier pathway to relating and connecting with God.

We all need to understand that He created us the way we are for relationship with Him. There is something that connects us to Him and makes us understand Him, His Spirit.

For what person knows the thoughts and motives of a man except the man’s spirit within him? So also no one knows the thoughts of God except the Spirit of God. Now we have received, not the spirit of the world, but the [Holy] Spirit who is from God, so that we may know and understand the [wonderful] things freely given to us by God.

God formed Man out of dirt from the ground and blew into his nostrils the breath of life. The Man came alive—a living soul!

His Spirit, the Holy Spirit is the line of connection. He helps us understand what God is saying, what He expects from us and how to please Him.

When the purpose of a thing is not known abuse is inevitable.

We are not the creation of one man’s experiment; we are a deliberate and purposed creation, created with a preconceived plan.

“Before I shaped you in the womb, I knew all about you. Before you saw the light of day, I had holy plans for you: A prophet to the nations — that’s what I had in mind for you.”

So, in the beginning, we were created with a purpose and that purpose was relationship, with the ultimate aim of pleasing God.

It is time to go back to the beginning…