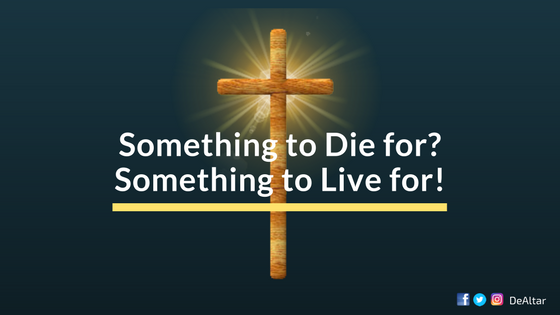 Joker; Will you die for me?

Joker: That’s too simple; will you live for me?

These words from Joker lingers in mind and it really got me thinking.

It seems rather easier to die for something than to live for it.

This is better explained however in a suicide attempt. The reason we are so willing to let go of life is because there is no reason to hold on to it. Simply put, there seems to be nothing to live for.

Life holds a greater purpose compared to death because, while Life gives, death takes. While Life adds value, death takes same away. Life always has something to offer but death has nothing but pain and suffering which could destroy any chance of hope.

We will all die someday we say. Very correct. But before we die, regardless of what kills us, what we lived for is much more important than what we die for.

While most will point this as a sacrifice for the greater good, we need to understand that a sacrifice that does not produce life is of no effect, just a waste of time.

I will like to share with you the story of a man who lived and then died to live again.

Sounds funny? Actually, you know this story very well. You have probably heard it countless times since you were in your mother’s womb. But hey, pay attention to this; we often conclude that the sacrifice was His death. However, we seem to forget or maybe ignore the fact that the actual sacrifice He paid was His life.

When faced with Pilate, He said, “you do not take my life from me, but I lay it down willingly and I can take it back if I please” (paraphrased).

While death is not an option, life is and that makes it even more important.

“… that whosoever believes Him will have life in abundance”.

“… the words that I speak to you, they are Spirit and they are Life”.

He did not just live to die, He lived to live in your heart. “Death” was just a path He had to pass to get there. Now He stands at the door of your heart. If you hear Him and allow Him in, He will dine with you and give you something to live for. That same life that flows through His veins.

Let me then ask you, what do you live for? When you have something to live for, death is not an option, it is just a pathway to greater life.

So dear friend, What or better put, Who do you live for?