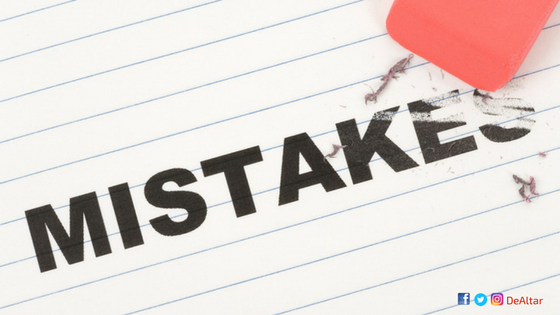 This was my reaction when I realized I sent unintended broadcast messages. I tried stopping the messages from going through but it was too late.

Things had gotten out of my hands and there was nothing I could do about it. I had no idea what to tell everyone that started responding to those messages. It was then it hit me; lots of people I had not spoken to in a long while were responding to my mistakenly sent messages. My phone kept buzzing. I was amazed at the number of messages I received from my mistake.

My mistake turned out to be an opportunity to check up on people I had not heard from in a long while. Some probably just remembered that I existed.  Lol.

To the artist, every mistake is a style, a design, a concept he or she would ordinarily not think of.  Mistakes have often times been accompanied by negative emotions, regrets and the likes. Some mistakes however have resulted in fantastic results totally unintended but made a difference.

Check This Out:  The Hands of Time

No doubt they hurt, cause a lot of pain, they make us feel terrible about ourselves. But a mistake does not mean the end of the world. Something good can come out of it. Do I hear someone scuffing? Lol. It actually makes no sense at first, until you see the results which often times require time and patience. It didn’t make sense when Pastor William Murphy’s parents bore him out of wedlock. They were still teenagers; there was no sense in it. But that mistake has turned into a testimony.

Don’t get me wrong I am not encouraging mistakes, not at all. I am encouraging you not to give up just because of that mistake.

Check This Out:  Created For a Purpose

I get scared of speaking or writing to specific sets of people and on some particular topics because I don’t want to look wrong. I don’t want people to see me when I make mistakes.

Lol… Prince EA said; “Being honest is better than trying to be perfect”. He attributed where he is right now to the mistakes he made.

I have come to understand that we learn from our mistakes. We get better when we see our wrongs.

Each trial wasn’t seen as a mistake but a new lesson learned.

Now a lot of us are even scared of approaching God because of the mistakes we have made. They have made us feel unqualified to talk to Him. He however didn’t come to this world for perfect people but for those who have made mistakes, imperfect people.

Little wonder Jesus said, the Physician is not for the healthy but for the sick. So if you have made mistakes, Jesus came just for you. God is seeking a beautiful and sincere relationship with you. Yes you. He loves you just the way are. And like the potter, he will fix those imperfections if you would come to Him.

I have made some really crazy, silly mistakes; but I have learned from each one of them, and I am a better person as a result.

We are not defined by our mistakes; they are important ingredients in our building process.