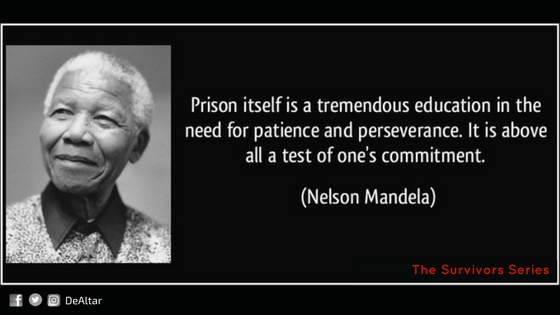 “Out of the night that covers me,

Black as the Pit from pole to pole,

I thank whatever gods may be

For my unconquerable soul.

In the fell clutch of circumstance

I have not winced nor cried aloud.

Under the bludgeoning of chance

My head is bloody, but unbowed

Beyond this place of wrath and tears

Looms but the horror of the shade,

And yet the menace of the years

Finds and shall find me unafraid

It matters not how strait the gate,

How charged with punishments the scroll.

I am the master of my fate

I am the captain of my soul”

According to people closest to him, Mandela often recited this poem from memory when he felt low or lost. During his long “holiday” as he called it, whenever he was permitted, he wrote and reread this piece of literature to boost his spirit and to keep his mind active.

A prison, with its thick walls, heavy bars and super strict policies, is undoubtedly the last place to nurture a fire in the spirit of a fighter. But even against all adversaries, South Africa’s first black President Nelson Mandela emerged with an even stronger spirit after his isolation in Robben Island and later, Capetown. He proved not only to survive his banishment for 27 years, but he also thrived in it. When asked how his 27 years in prison, had affected him, his answer was unexpected. “I came out mature,” he said.

Check This Out:  The Foundation

How he did this still puzzles a lot of people till this day. Years went by with almost no contact with the outside. He was permitted to receive only one visitor every year for 30 minutes as well as write and receive one letter every six months.

Due to his defiant nature, he often earned time in solitary confinement which he described in his autobiography; “The Long Walk to Freedom”, as “the most forbidding aspect of prison life. There was no end and no beginning; there is only one’s own mind which can begin to play tricks”.

Twenty-seven years is a very long time. Even for a man with so much fire, this was more than enough time to extinguish whatever it was that kept him running. In order to survive this much discouragement and refuse defeat, optimism is absolutely essential. The state of his mind had largely contributed to his own survival.

Mandela eventually bent even the most brutal prison officials to his will, assumed leadership over his jailed comrades and became the master of his own prison. He emerged from it the mature leader who would fight and win the great political battles that would create a new democratic South Africa.

Nelson Mandela definitely experienced times of grief and loneliness. He lost his mother and son during his time in prison and wasn’t permitted to attend their funeral, suffered a few ailments along the way but they were not enough to hold him down as he kept bouncing back.

For the entire time he was in prison, he maintained his demeanor and inspired a lot people. It was obvious to all that there were not enough bars and walls to contain his positivity. Nelson Mandela was a living testimony and proof of how possible it is to overcome even the most negative circumstances and situations.

Check This Out:  LEARNING THE ART AND ACT OF TRUSTING GOD

Today Nelson Mandela though late is still celebrated as a World Hero and Legend. The path he had to go through is not one anyone would wish or pray for. But he kept fighting even when hope seemed to forsake him, he kept on seeing a way out even when the natural senses could not find a way out.

“For I consider [from the standpoint of faith] that the sufferings of the present life are not worthy to be compared with the glory that is about to be revealed to us and in us!” Romans 8:18 (Amplified).