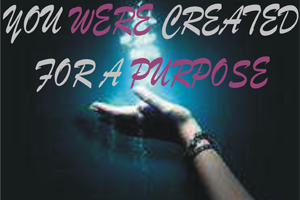 “You were put on this earth to achieve your greatest self, to live out your purpose, and to do it courageously.”
― Steve Maraboli
Gospel singer, William Murphy narrated the circumstances of his birth in his song, Created to Worship. He was born out of wedlock to teenage parents so everyone thought he was a mistake. He was a child that was never meant to be. Perhaps his parents thought so too. But as it is right now, even the best critics will not argue that his birth was no mistake. It made a lot of sense to conclude that the fact that you are the product of a mistake does not make you a mistake.
I have heard this said in various fields; arts, science, and so on; “every mistake is a potential design, you only have to see it in that light”. Well, at first it does not look like it. The artist or scientist fumes at such mistakes, claiming it destroyed his design. However, all he needs to do is to take a closer and deeper look at the whole design without picking out the mistake and his eyes could be opened to a whole new world of possibilities he never thought of; a new and unique design he would never have imagined in all his time of creative and meditative thinking. All he had to do was to see the whole picture without picking out the mistake.
Come to think of it, what is a mistake? A mistake is an action, decision or judgment which produces an unwanted or unintentional result. It does not say it produces a negative result. You probably never thought of such a result, talk less of wanting it but look closer and such a mistake could produce a life changing result you would never have come up with even with your planning and strategizing expertise.
Here is what we are driving at, regardless of the circumstances surrounding your birth or your life in general, you were born for a reason. No one is created by a mistake. Everyone was born for a reason and your purpose is the reason you were created.
Mistakes have produced some of the greatest inventions; unintentional acts have resulted in breakthroughs in various spheres. Such inventions were not discarded because they were products of a mistake, rather such mistakes have been appreciated over time and such products have become invaluable and irreplaceable in the society and the world at large.
The mistakes you have made are not who you are, they do not result in your life being a waste. You decide if your life will be a waste or not by either brooding over the mistakes you have made or standing up and seeing beyond the mistakes.
You were born with an assignment to do, a task to perform, a purpose to fulfill. You were created to make an impact in someone’s life or lives of numerous people; you were created to be the solution to a particular problem someone could be facing or even a problem the world is facing. The world believes that there are too many problems in the world; I believe that there are more solutions than problems in the world but more problems are exposed compared to solutions. You were created to be an answer to a particular question facing the entire globe.
Life is only existent where purpose is known and is embraced. Your purpose is what makes your life more meaningful, not just a period between birth and death but also a period of significant existence not just for yourself but also people around you. Your purpose can only be found in Jesus.

Check This Out:  How to love what you do: Passion and Commitment