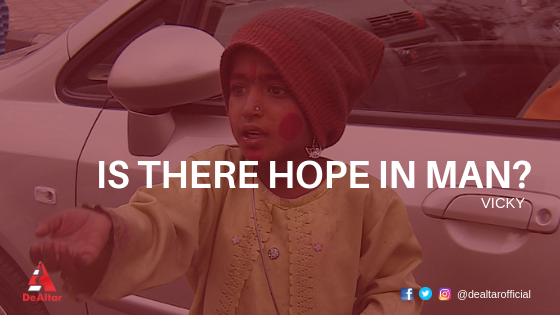 Under the bridge, on a street in Lagos, Abulegba to be precise, He paced with anticipation and a little twinge of excitement, perhaps, with a promise of a miracle…

Men’s arms were so attractive to look on, a saving grace from the turn of tides, the bosom of any hope at all…

A quite elderly man walked passed looking quite good in his lace cloth and the little boy almost jumped for joy as he approached the man but with the wrongest choice, he took the man’s hand and the floor was refuge from the almost reflex~push.. Sitting on what seemed like eternity, the young boy stared at the skies and then at me, the next passer~by and his eyes gave away a part of his story..

Such a short time I’ve been in this world and yet, it feels I’m too familiar with the unpleasant sides. I really wish I did not have to cling to any man’s hand. Walking the streets in the sun is far from the exercise I can ever come to love and the disgust that I’m served from the eyes of men never is food in my stomach. If I had a choice, not in my last life will I choose to be this way…..”

Steps away from him, I heard him shout unfamiliar words and one glance at him almost concluded the story– frustration was making known it’s awful self to the young child and hope was luxury that words alone never could afford the child.