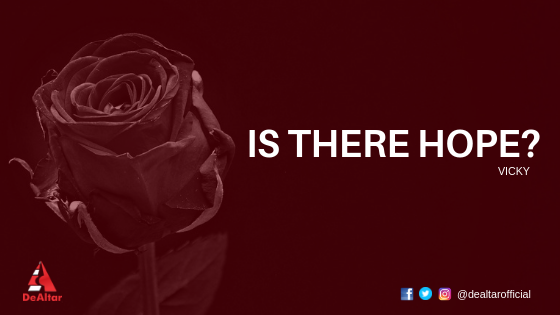 That the world will be a better place?

That peace will rule our society and then, our hearts?

That our rights of freedom won’t be violated?

That humanity would suffer no more?

That bad news will be ruled out from our reports?

That death would only be nature’s curse?

That violence will die in the hearts of men?

That brutality would work no man’s hand?

That war is unthought of?

That strife and envy would reach their end?

That tears be only of joy?

That justice is as nature?

That poverty is completely eradicated?

That every place is a safe place?

That education is a priority?

That terrorism finds no expression in the hearts of men?

That poverty is eradicated totally?

That help is every man’s mission?

That love is every man’s expression?

That light is every man’s vision?

Again I ask, is there hope that any of this is possible?

Ashamed, we can’t deny the realness of reality.

Humanitarian crisis fueled by years of chronic underdevelopment, conflict and natural disasters has a grip on most fledging nation among which is South Sudan.

Years of brutal civil war has displaced so many people leaving them without access to food and agricultural livelihood. Food assistance, protection from sexual and physical abuse is a blessing they yet await. Innocent agitations over trespassers and their want for protection is hijacked and misinterpreted into war leaving them in the hands of violence and insecurity. Ethiopia, Kenya, and Somalia suffer prolonged drought, families are dying from starvation alongside diseases and majority of the people are left handicapped (with no idea of what to do).

The lack of proper education, child protection, healthy nutrition, and shelter greatly plagues Cameroon citizens. Political mess involves the citizens and most of them lose their lives from.

Burundi isn’t left out as poverty, food insecurity, chronic malnutrition has a devastating effect on its citizens.

Terrorism and violence occupy a large territory in Egypt.

Libya is a hub of scarcity. The basic needs in life are scarce in the country, cash, food, fuel, water, electricity, health care leaving civilians vulnerable. However, Libya critically suffers from ethnic violence, the whole display doesn’t spare any man that gets in the way. The Fight for political power has the nation disruption and when these people can’t take it anymore, they smuggle on a small life-saving boat to get to Europe by sea but the innocent storms send some falling off into the sea, pirates are never good company yet they stick around always wasting lives.

Is there hope for Africa?

Where is the hope for Africa?

Peradventure, we could draw hope from other continents.

South American countries are the hub of Mafia and violent cabals. Young people are used to traffic drugs, to murder, for sex trafficking, in slavery.

Even in Central America, the northern triangles countries suffer the effect of drought and floods, unprecedented levels of violence from organized criminal groups.

Now, these are the ‘external’ issues, how about the internal ones. We’ve almost totally buried the existence of racism but we know that racism still lives and a number of others

Just where in the world is hope?

The deadness of help is alive

Check This Out:  #31DaysWithTheAnchor - Day 9

Sadly, hope is fading away

Just as our world falls apart

We fall apart alongside

We die to expectations

Unable to work our belief

We’ve been in want too long

We’ve dreamed and desired and prayed

Yet with a seal of unbelief

We are afflicted by the order of mishaps

Plagued by the deterioration of economies

Chagrined by the blight and plight of communities

Shamed at the impotence of government

Haunted by the bankruptcy of innovation

Grief-stricken by the great decline in morals

Hope sounds like a popular fairy tale that ends in happy ever after. An assurance that brightens our faces. A word that improves our mood. A Melody that intoxifies us for a while uplifting our broken spirits. But we can’t live only to die without an impact. Without a structure for our next generation. We can’t leave them in the same dire and hopeless situation. We can’t keep enduring to survive, we need to live.

For if hope is dead, it can be reborn. This season specifically reminds us that Hope for humanity was born some thousands of years ago. Though, not everyone knows of this truth what are the ones who know of it doing?

If we choose to look from the incapabilities of our government and look at ourselves. If you start by giving an extra slice of bread to a hungry child. An extra pair of dress to one who barely has. An extra pair of shoes to someone without. An extra book to a student who doesn’t have. A word of encouragement to a despaired soul. A smile to a tired person. A  pull to one who is in need of help. A hand to a helpless one. Lending a shoulder to a crying one. A space to learn for an uneducated child. Water to people without. A push for an unsure person. A hug to a broken heart. A song to a sad soul. A letter to a faraway loved one. A listening ear to the one who needs to talk. A Christmas package to a family without. The list is endless but the message is that we start by identifying a need and satisfying it. From your end hope begins to spread in hearts, in lives. For love isn’t magic, it is an intentional expression.

Check This Out:  #31DaysWithTheAnchor - Day 7

For God so loved the world, He gave His son (that He will bring hope, peace, joy, love, goodness, salvation to our lacking world). Love births multitude of goodness even hope.

We are not here just to analyze and go to our home to live by ourselves. We are to help others live again.

How will they know of hope, when they have not heard?

How will they know when there’s no proof?

Let the Lord use you to proclaim this good news, to propagate this truth, to express this wonder. That there is hope for all of us. There is hope for the world. At a time like this, thousands of years ago, hope was born and in this same season, hope is reborn.