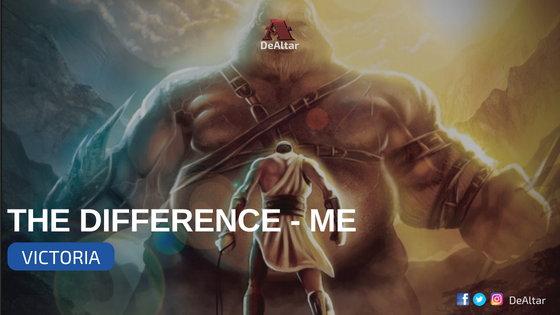 Who would save the people?

Who will blot out the stain on our honour?

Who would stand to war?

Who would bring the people peace?

Who would rise from the crowd?

Who would stand out?

Who would deliver them?

Who would be the difference?

Soldiers of a whole nation together with their king stuck, shaking in their armour, trembling at the sight of a single man. The battle cry was at the loudest but not a single soul could make an approach. Cowards, were they?

I was a witness to the people’s terror but I was past fear. I’ve seen all of this before, I’ve heard the roaring but from a beast, I didn’t sit back then, I went after it to deliver my sheep. “I’d do the same with this one who has no regards for God’s people” I said even to the King.

Check This Out:  Be The Difference

I was not experienced in any way on the battle ground, knew no thing about swords and my developing body was too small to lift a tunic, imagine me!

But I’ve been here before, with the bear. If I could then, I can now. Practice then and perfection now.

Had he known, he would have humbled himself and retreated, I was nothing to him, too small, unarmed, ‘a piece of sacrifice’ he sneered. Of course I was but I had solidly behind me the mighty man in battle, the army of angels at my beck and call. This was the difference, we were all God’s people but we knew so little about His capacity, moved by sight we let fear settle.

Check This Out:  She is Different

“But they that know their God shall be strong and do exploits.”

And great exploit it was when a mere sling shot brought down an armed giant and on a platter, his head.

It looked too much of a miracle but while tending to my father’s sheep, I’ve been becoming and now, the world sees The Difference – Me.