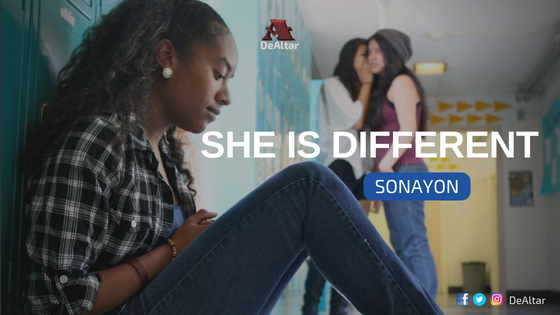 The room was crowded just as it always was, chatter coming from each direction, in the midst of this she sat, trying to focus on what was coming, preparing her mind for the next lecture, she didn’t join any of the conversations, not just because she was distracted, but she also couldn’t relate to what was being said.

For the longest of times they always looked at her funny, or make urgent hushed whispers when she passed, until they just stopped noticing her and she melted into the background.

It bothered her to not be liked, not to have friends she could laugh with reckless abandon with, but each day she took in stride, each day she went on, not because she had figured a way to totally stop caring but she received strength for each day and peace, a wonderful peace that rained over her constantly.

She was happy, she was light and she smiled more at them, though that caused more stares, she wasn’t bothered, she was happy and free.

Sitting in the library one day, she heard muffled tears around her and was disturbed, she felt a burden to speak to the person, alas it turned out to be on of her course mates, she stared at her for the longest of times, conflicted a bit, until she pushed all aside and called out to her, she startled her, but despite her obvious glare, she went on to sit beside her, quiet for a bit, until she asked her if she wanted to talk about it.

Check This Out:  Blind Spot

Off she went rattling on about a silly fight she had with her friend, she listened quietly never interrupting, then she told her after she was all done that she could get peace if she wanted it, that intrigued her and she asked what she meant, she went on to tell her about Christ, his sacrifice on the cross, his resurrection, the hope that humanity has in him, the love he had for each and everyone, not for a moment excluding her and the peace that comes from him.

She cried harder and said no one had ever told her that, no one ever mentioned to her that she was loved by Jesus, she said she needed his peace, right there they prayed, both with tear stained cheeks but ignoring that, they had peace.

Check This Out:  The Difference - Me

Thus her difference begat a difference and they were 2, and grew stronger each day, guiding themselves and then others.

Being different wasn’t bad she said to her one day as they sat in class together and they laughed, boisterously and people stared.

Do not conform to the pattern of this world, but be transformed by the renewing of your mind. Then you will be able to test and approve what God’s will is—his good, pleasing and perfect will.