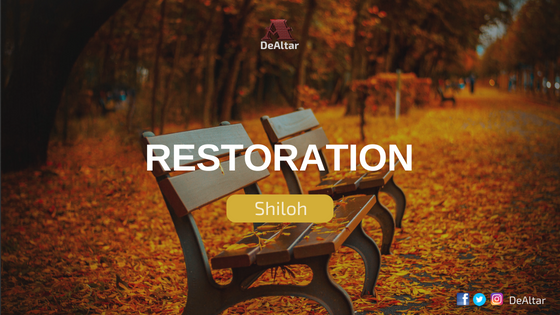 When we hear the word RESTORATION, what comes to mind is recovery. Recovery of things lost.

This is correct, but where we make the mistake is in waiting for God to “restore” us.

Just because God has promised restoration doesn’t mean we are to sit back, fold our arms, cross our legs and let God get to work. We have a role to play in our journey of restoration. Yes, restoration is a journey not something that is achieved within an hour.

We are going to learn from the life of a man who lost it all and was restored. He is a man after God’s heart, the one and only King David.

Check This Out:  Be The Difference

So when David got to Ziklag, he saw that his home had been destroyed, his wives and children taken captive. The Bible says that David and his men wept until they had no more power to weep. Its very okay to cry when you lose something, but the question is for how long are you going to cry? David knew crying wouldn’t change the situation, but didn’t realize it until his men began to talk of stoning him.

As a leader, people would blame you for their loss.

What do you do when you’ve lost everything and the people you expect encouragement from also begin to blame you for their own problems or losses? In other words what do u do when you don’t know what to do?

Encourage your self in the LORD. This was exactly what David did. After encouraging himself, he sought the face of God. He sais to priest Abiathar “bring me the Ephod”. The Ephod was used to know the mind of God in those days.

When the Ephod was brought, David enquired of the LORD. Please note that David asked two questions but got three answers.

He asked shall I pursue after this troop? Shall I overtake? This means David wasn’t expecting his family to survive the attack he had probably concluded they were dead. This is the answer David got.

Pursue, for thou shall surely overtake them, and without fail recover all.

If we read the whole of 1Sam 30, we would see that David recovered all. Infact, he recovered more than he lost.

I didnt intend on making this a series but the Holy Spirit is so amazing. In the next series we would be looking at some virtues David exhibited which helped him in recovering all.

Remember God wouldn’t come down and pursue for you. Figure out what you have lost, seek the face of God and pursue after that which you want to recover.

Welcome to your season of RESTORATION