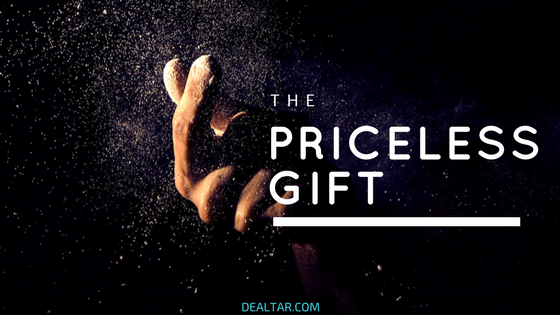 What is the best gift you have ever received?
Recently, a friend celebrated his birthday and his “bae” had to say something about him. Well, she was shy at first but then, she started and I was amazed at some of the things I heard. Particularly, I was amazed at the Love that was expressed. It was breathtaking. Lol… I wanted someone to say those same things to me.
Thinking about this, I realized something very important; actually something was beginning to make more sense than ever before…

For God loved the world so much that He gave His only Son, so that whosoever believes in Him would not perish but will have eternal life

What made so much sense to me? Love… The first true expression of Love; the greatest gift given to man. Everything we celebrate today, everything we are grateful for was born of Love. Jesus was a product of Love, Love expressed in human form. Grace, Joy, Peace, Family, Wealth, and more all have their roots in Love.

Knowing that the Love of God is given freely, is boundless and is available to us is just amazing.

So, I thought of the mistakes, flaws and faults but I still saw Love. The kind of Love that exists between the Groom and His Bride.
I was awed at the wickedness that comes out of Man and sometimes, I wish I had the power to punish everytime someone took advantage of me or did something really hurtful to me. But then He asked me, do you know how many times you have taken advantage of me? Do you know how many times you hurt me? Do you know how many times I had to be patient with you?
I was broken… here I was, thinking about how terrible people have been and asking why they should go free with no form of punishment; it had not occurred to me that I was doing those same things to the One who loved me dearly and I still almost always got away with it. I always got another chance.
A typical husband – wife love is limited, has its boundaries. But this is not a typical husband and wife relationship. One that would give himself to be killed as his bride price is no ordinary husband.

For I have loved you with an everlasting Love

This would be the most beautiful thing any lover will hear. It actually sounds too good to be true. Honestly, it should be impossible. But that is just to the physical being. The fact that you cannot see something does not mean it is not there. The fact that no one has ever shown you so much love does not mean no one can show so much love.
I love “love stories“, I love “happily ever afters“; lol… they seem so unrealistic.
It is usually between a Princess and a Prince from a far away land who becomes her Hero, saving her from one spell or witch or beast or whatever. The stories are usually quite similar. And they seem to be mere fantasies of the human mind; but I see beyond those fantasies.
I see a Prince leave His Kingdom and all its glory, to come for His Princess in danger of being swallowed up by a terrible beast. He fights until His last breath and is victorious and right at the death, He kisses His Princess and she lives again. He then takes her to His palace and they live Happily Ever After… The End.
Lol… this is no fantasy, it is real. This love is real. It is the best gift man has ever received and will ever receive. It is the best gift you would ever have. It is priceless, the priceless gift; Love.

We Love Him because, He loved us first…

You Are Never Alone!

Check This Out:  Is there a condition to Love?
Expressions of loveGiftLovePriceless gift