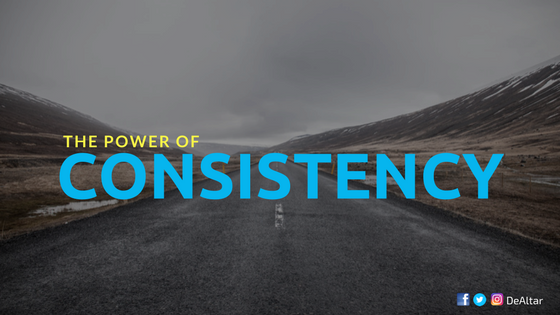 But guess what? I wanted to stop at some point. Not because I had nothing more to write about, not even because I was discouraged to write more. But because I felt I had already written enough. There was no reason for me to go much further. No need to continue. I felt that by all standards, the series was good enough, got a few testimonies, people were blessed and helped, that should be all about it. So I thought.

Check This Out:  The Power of Consistency - The Benefits

This was when I realized that there is an enemy of consistency more subtle than discouragement or the feeling of failure. And that was Complacency.

You feel there is nothing more left to do, the deceptive feeling of satisfaction and accomplishment. Trust me, they are harder to break through compared to discouragements as a result of failure.

What happens if after 20 years of being consistent in something, you eventually achieve what you had set your mind to achieve? Most of us would simply relax to enjoy our success. What we do not know is that there is so much more ahead of us if we are going to remain relevant.

It takes about one strike to destroy all that you have spent 20 years to build.

Check This Out:  The Power of Consistency - The Momentum

Men ought always to build capacity, and not to rest, thinking they already have it all. (paraphrased)

There is always something more to conquer, something you have not touched. What you think is good enough is most times not your best. Some of us are capable of much more, but we have for so long limited ourselves by being “local champions”, being just “good enough” for ourselves when there is so much more for us to be.

Don’t stop short of being the best just because you think you are already good enough.

When the accolades start coming in, when the praises start breezing in, don’t be deceived to believe that is all there is to it. There is always something more, something much greater to look forward to if only we would start looking forward.

Check This Out:  The Power of Consistency - The Content

Your best is ahead of you. Do not stop for anything, not even success which often times, is just a bus stop, not your final destination.