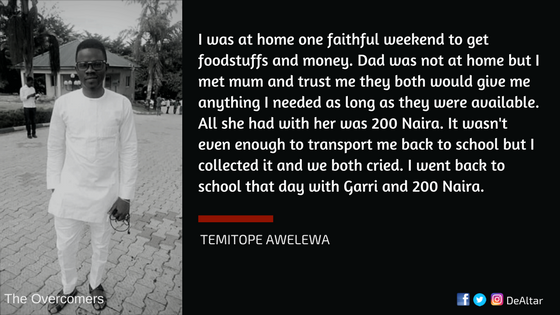 Mr Temitope Awelewa is a vibrant young man, a geology graduate from Ekiti State University (EKSU) who is presently an Entrepreneur, a Convener of Charity Organization; Let’s Feed a Market Child, the owner of a digital marketing hub called GoMedia and also a digital skills trainer with Google.

Seeing that life is going on pretty well for him as he is quite successful, one might conclude he definitely had a pretty smooth background which aided him but did he?

Mr Temitope hails from Ilawe Ekiti, Nigeria and is the last born of an average family of 6. Growing up,his dad was a farmer and a painter while his mum sold kolanuts. He had both his primary and secondary school education in Ilawe (both in public schools). As you might have guessed,his family wasn’t exactly buoyant and for his lunch at school,all he gets is the garri and sugar he kept in his pocket sometimes with groundnut if available which he would take while he was being taught English language in Yoruba.

He didn’t have access to many things that children enjoy while growing up but regardless of the absence of luxuries, he was fortunate to have being brought up in the way of the Lord. After his secondary education, he proceeded to EKSU which wasn’t exactly his choice but he had to settle for considering funds but again, how did this young poor village boy come to achieve so much and become successful?

Check This Out:  The Story Of My Life - Aremo Olalekan {Part 3}

Sit back and learn as Mr Temitope shares his story…

“My first school fees in EKSU was 101,750 Naira and it was like asking everyone in my house to donate their kidneys. Fortunately, they were interested in me going to school, so they had to organize a family meeting .The money was shared among everyone, and to the Glory of God, I was able to pay up. This experience transformed my entire life. It changed my aspirations and I got strengthened.

I was at home one faithful weekend to get foodstuffs and money. Dad was not at home but I met mum and trust me they both would give me anything I needed as long as they were available. All she had with her was #200 .It wasn’t even enough to transport me back to school but I collected it and we both cried. I went back to school that day with garri and 200naira. I got to church and the word shared by my Pastor triggered my Spirit. He said, “the gift of a man maketh a way for him and not his certificate”. And that was it for me.

Check This Out:  The Power of Consistency

I was a member of the press club while in secondary school so I decided to join the crew in EKSU. Most times I would be in the office of EKSU Press, writing while my course mates were battling Geological assignments! I was mocked and I was sent out of class many times because I came late. But I was never discouraged. I became the associate Editor in the crew after one year and it was the first time a new member ever attained such.

We were getting some stipends then on writing so I wasn’t going home frequently anymore to collect money. I learnt painting while with dad so I was doing hostel painting too for folks to gather money.

A sister noticed I was good at painting and connected me to a man in Lagos to help with his hotel fence. While working on his fence, he overheard me speaking to a friend on the phone with English and was quite surprised having earlier concluded that I was an illiterate. He was impressed and gave me another contract having 4 flats. It was the first “huge” money I ever handled in my life; the contract was #800,000

I paid my school fees and started a charity organization which had always been my passion. I started LET’S FEED A MARKET CHILD to help children whose situations were worse than mine. Hopeless children on the street hawking, with no hope of a better tomorrow. Not everyone I gathered for this project stayed. Some didn’t see the sense in it and left.

The rest of us started LET’S FEED A MARKET CHILD while I was in 200 Level and that was the beginning of another struggle. We did the first outreach for 15 children gave them food and academic materials. A lot of people didn’t expect us to continue but we did and then the little money I was getting at home stopped! They were annoyed at the fact that while they were struggling to give me money, I was busy feeding some children I knew nothing about. It was one of the hardest times for me but I kept going. Thank God for my passionate Team members and my little popularity in EKSU. People were donating their foodstuffs and used clothes for the cause and we were able to continue for the third and fourth episodes.