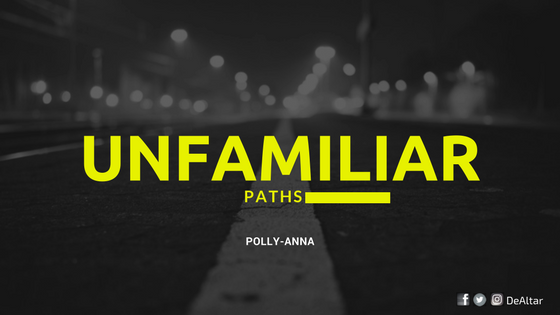 Treading unfamiliar paths alone can sometimes be dangerous and even leave one foolish at times. There was a time I went to spend some days with some family friends and I was asked to run an errand with one of their children. We took separate bikes because what we had to carry was much and because I had gone with her the previous day to the place (though in a taxi), my bike man left first. At first, he took the road I was familiar with, then later he branched to an unfamiliar path. I was silent at first since I was believed it to be a short cut and we were still moving between houses, but as we journeyed, the houses disappeared and we were surrounded by bushes on all sides. At this point panic began to set in, I couldn’t see my sister’s bike neither could I see any other vehicle around and even though we were on a neatly tarred road that obviously led somewhere, I couldn’t help but think negative thoughts. By now I was shaking with fright as my brain was plotting escape means if things went wrong. I even stopped the bike man to confirm I was still safe, he stopped but was obviously angry at my unnecessary complain and so I told him to keep moving. As we moved, I prayed inside and quoted Bible verses on protection, it was while quoting one of these I realized I was only letting the devil play his tricks on me. I had had my head filled with stories of people who had been kidnapped and I had forgotten to trust God for my safety.

“Those who trust in, lean on, and confidently hope in the Lord are like mount Zion, which cannot be moved but abides forever. As the mountains are round about Jerusalem, so the lord is round about His people from this time forth and forever. “(Psalm 125:1-2 AMP)

The devil plays little tricks on our mind by planting fear and self-doubt when we are not in our comfort zone. He makes us think we are inadequate when asked to take up new challenges and when eventually we fail, he tells us “I told you” and we in turn blame God. The God we left behind in doubt. Failures that come through inadequacies are rooted in our lack of confidence in God and ourselves, not because we were meant to fail.

“When you pass through the waters, I will be you; when you walk through fire, you shall not be burned, and the flame shall not consume you. Because you are precious in my eyes and honored and I love you… “

There are several other verses across the Bible where God confirmed He is with us, if we put our trust in Him. As we know caution is necessary in all that we do and that is, not walking that unfamiliar path without God. When put in unfamiliar places and situations that cannot be avoided, we should not listen to the whims of the devil but trust completely in God by making him our companion and eventually it will turn out well.

Check This Out:  SWAT THE FLIES, DROWN THEIR NOISE By Polly-Anna