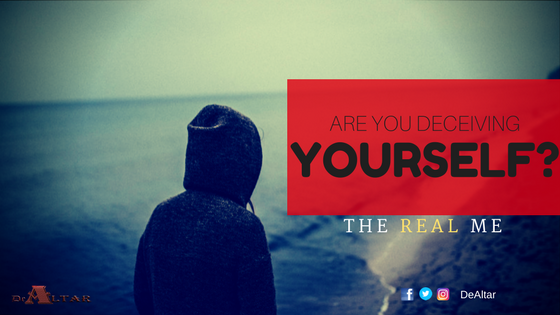 In the third chapter of Genesis, everything changed for humanity. What happened in the lives of Adam and Eve radically changed everything that we face today in our own lives. The heads, the hearts, and the hands of our original parents were shattered on that day.

Eve replied to Satan with Truth, repeating to him what God had told them. Satan begins the process of deceiving her: Then the serpent said to the woman, “You will not surely die. For God knows that in the day you eat of it your eyes will be opened and you will be like God, knowing good and evil.” So when the woman saw that the tree was good for food, that it was pleasant to the eyes, and a tree desirable to make one wise, she took of its fruit and ate. She also gave to her husband with her, and he ate. Genesis 3:4-6 NKJV At that very moment, first Eve and then Adam moved from Truth to self-deception.

Self-deception gets us into trouble even today. We deceive ourselves in lots of ways. A woman called me on my radio program. We were talking about the sanctity of marriage. She said to me, “I’m a Christian; I’m a follower of Christ,” but in the next few breaths she said, “I’m living with a man,” and it was clear to me that she saw nothing wrong with that.

So I challenged her. “Well, tell me a little bit about your spirit. How does this affect your spirit?”

She said, “Well, Randy, it’s better than me going from man to man to man.”

She had convinced herself that it was okay to live with this man, even though she wasn’t married to him. Later in the conversation I discovered this man was married to another woman. But she deceived herself believing it was better than sleeping with different men every night.

The Bible says in Revelation 12:9 that Satan is a deceiver. In Genesis 3, he caused a doubt in Eve’s mind about the Truth. Satan, the author of deception, is blamed for all of this, but the decision to doubt God’s Word was a decision Eve made. She deceived herself by saying like, “It’s true that this fruit looks good; it is pleasant, and I can be like God. It must be an okay thing.”

When we deceive ourselves, we come to the wrong conclusions for our lives. I deceive myself by thinking; it’s only one bowl of cereal. It’s not that big of a deal. It’s just a few extra calories. Maybe for you it’s I’ll only put this one item on a credit card because I really do need this. For some its pornography—those that get online and watch pornography say to themselves, I’ll just do it this one time. It really doesn’t affect my spirit all that much, and we deceive ourselves.

Check This Out:  Trust
[blockquote author=”” link=”” target=”_blank”]When we deceive ourselves, we come to the wrong conclusions for our lives.[/blockquote]

Robert Southey said, “All deception in the course of life is indeed nothing else but a lie reduced to practice, and falsehood passing from words into things.” It begins in our thoughts, moves to our feelings and eventually we act on it as it moves into our behavior.

If you are going to choose to live the intentional life in Christ, you have to build your life each day on 100% Truth, realizing that anything that deviates from the Truth becomes self-deception. So, what is it that you find yourself being deceived about? What does the truth of God’s Word say about that? ONE THING you can do is recognize the deception and tell yourself the Truth about it today.