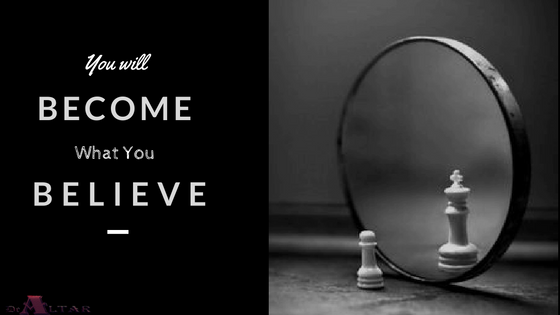 He touched their eyes and said, “Become what you believe.” Matthew 9:29(MSG)

Jesus was on his way home from healing someone and on his way two blind men went after him needing something from Him. He then asked them a very interesting question; do you really believe that I can do this? And they said, yes. Then He touched their eyes and said, “become what you believe”.

The legendary boxer, Late Mohammed Ali made this notable quote; “I am the greatest! I said that even before I knew I was”. A powerful statement that will definitely have had a hand in spurring him to the great feats he achieved during his time.

Unfortunately, we are surrounded by a system that challenges our self-belief and tries to make us think the worst of ourselves. The identity of young people are brought into serious questions and it seems pretty difficult to rise above these limitations.

However, we need to see that whatever we will be on the outside is a product of what we are on the inside. Virtually all the great pace-setters and record breakers and great inventors have one thing in common; they saw their greatness when it was not obvious for others to see. They saw greatness in themselves when no one gave them a chance. They saw inside what no one could see outside and eventually, that which they saw inside began to materialize and everyone could see and celebrate them.

Check This Out:  Who Am I? By Reverh

What you can see presently in the lives of celebrated men didn’t start the first time they appeared on the front pages of the newspapers or when they were first recognized for their ground breaking achievements. It all started a long time ago when they could see what no one else could see in them.

A lot of young people in this present time believe the worst in themselves. I have once thought I was a mistake, a piece of a puzzle that does not belong to this particular puzzle pack. (Sounds familiar?) Many of us have accepted that nothing good can come out of us, we are not capable of doing great things, and we don’t not belong to a particular class of persons. It is a terrible feeling a lot of us have had to live with which limits us and eventually we cannot be the best that we are supposed to be.

Check This Out:  The Real Me

We need to stop denying ourselves and the world the best of ourselves by believing the worst of ourselves. Whatever you will be on the outside starts from your inside. Whatever you will be in the next five years is what you are on the inside right now. I won’t try to deceive you that it works like magic (instant) because it does not. It will take some time but eventually the inside you will start forming outside. Like Prophet Habakkuk said, though it may tarry, it will surely come to pass.

So start believing who you want to become; it is only a matter of time before you eventually become what you believe.