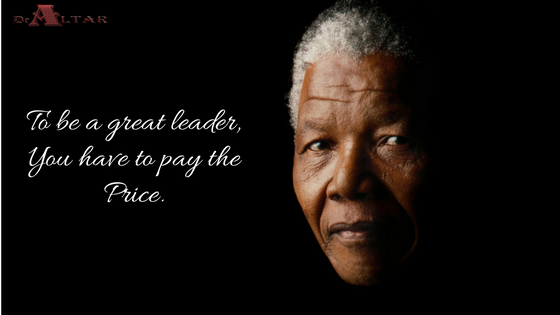 I have been reading a book recently titled; The Price of Leadership by John Stanko. It’s been teaching me that; for you to be a great leader, you have to pay the price.

Nelson Mandela was in prison for about 25 years before becoming South Africa’s first black President, Florence Nightingale was criticized and rejected by her family for choosing her profession. One very funny example is a music guru, Mozart who had to sacrifice one of the two instruments he was equally good at in order to be the best at one. That is surely a hard choice to make, but it was the price he had to pay to become a much revered icon in his field.

Bringing it a little closer to you, take a look at some of the great pathfinders around you and try to look into their stories, their backgrounds, their experiences; they all at one point or the other had to pay the sacrifice for the greatness they have achieved. Like it is often said; No Pain, No Gain.

Recently I took a stock of the things I had to do to be a better me and I wrote beside each of them how much time each of them will cost me and I was really taken aback. It was amazing and scary how much time they would cost me. I however took steps and started working towards them and trust me, it has not been easy. One major thing I knew I would have to sacrifice was sleep and it also meant there was no free time for anything else. I would have to stop movies, put a restriction on chats and a number of other things. It felt like a lot of things just hit me all at ones and I just stood absorbing the effect.

I believe some of us do not have problems with knowing the price we ought to pay to be who we want to be and who we were created to be but our problem usually lies with how to pay the price. Some of us really want to pay whatever the cost but we often see ourselves fall short and most times we just give up. Well, there is one price you cannot afford to pay to be great and that is giving up. Since I took this stock and made plans on how I will go about these demanding routines, I have not been faithful keeping them. In fact, I have been really lazy. But there is one thing I don’t do; I don’t give up because I was not able to keep to that routine or pay that price. I keep trying and will keep trying until I am able to successfully live that life of sacrifice for the Me I see in the future.

I am not referring to those who have sleepless nights without or with little results, I am not talking about those who toiled all night but still caught nothing. I am talking about those who have genuine desires to stay awake and do something productive but just fall asleep five minutes later, those who really want to carry their books and read but keep getting distracted, those who struggle to watch their diet or those who no matter how hard they try, the thought of pornography or masturbation just seems to linger in their minds. It must be duly noted that there is a place of knowing yourself but that is not my focus today and I know some premeditated answers often given to such people. Some of which makes one feel that maybe we are not cut out for this and we throw in the towel and settle for mediocrity. However, I want you to have this engraved in your heart; You cannot afford to give up. The fact that you don’t have enough to pay for your education or buy the books you need to study does not mean you have to give up. The fact that you struggle with reading and you really want to be like those brilliant chaps in your class doesn’t mean you have to settle for mediocrity. There is always a way out. You may just have to carve out your own way instead of doing it the way others are doing it.

The price of leadership and greatness is often times too expensive and no one might know how much it cost you neither will it look like anyone cared or even cares; but in the end, it will surely speak.