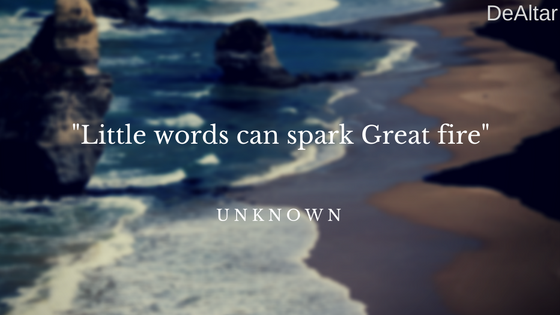 Have you ever thought of the effects those little words that spill from you have on those people they are said to. It’s like an element in its state of excitement. It simply explodes only for it to eventually attain a stable state and realize how much havoc it just caused. You probably have no idea how heavy your words are. Here is an interesting story you could identify with as either the victim or the main actor:

My stomach dropped when I saw Phil walking toward me in the cafeteria.

“Please tell me he’s not coming to talk to me,” I whispered to my friends Lena and Alyssa.

That’s what worried me. The winter formal was three weeks away and rumor had it that Phil wanted to ask me out. With thick black glasses, hyperactive sweat glands, a bad case of chin acne, and the tendency to use the word “cool” a few hundred times a day, Phil wasn’t exactly the man of my dreams.

“Hi, Christy,” he said, his voice cracking as he uttered the first syllable of my name.

“Uhhh, I was just wondering if you’d like to go to the winter dance with me. I think it would be cool,” Phil said as beads of sweat formed at his temples.

“So, what do you say, Christy?” Alyssa said with a smirk. “Does Philly here need to go buy you a cool corsage?”

It’s true that I didn’t have a date yet, and I did want to attend the dance, but if I went with Phil my friends would tease me to no end.

“Not interested,” I said flatly as I looked at Phil’s glistening forehead and dotted, bumpy red chin. “I’d rather go alone than be seen with you.“

The moment the words fell from my lips, I could feel how harsh they were. “Oh-oh-OK. Cool,” Phil said softly. “Well, I guess I’ll see ya around.”

With his head down and shoulders slumped, Phil slouched away to a table on the opposite end of the cafeteria.

I watched him sitting alone, staring out into space. Here was a guy who had probably spent the morning working up the nerve to ask me out, and with just a few words, I’d crushed his spirit.

I knew God wanted me to treat others with compassion and kindness. But instead, what had I done? I’d blurted out something hurtful.

I looked across the cafeteria. Even from a distance, I could see a sadness in Phil’s eyes.

I felt absolutely horrible, knowing that I was the cause of that sadness.

I knew exactly what I had to do, so I took a deep breath and asked God for the courage to go up to Phil and apologize. As I approached Phil’s table, my stomach knotted up.

What if I say something stupid and make a fool out of myself? I worried. Or what if the words come out wrong and I end up making things worse?

When I reached Phil’s table, all I could utter was a soft, “Hey.”

“Hey,” he echoed just as quietly.

I fidgeted with the shiny zipper hanging from my backpack as I tried to find the right words—any words. My mouth was dry and my palms were sweaty. I couldn’t help thinking that this was probably how Phil felt when he approached me.

The awkward silence was excruciating. Finally, I couldn’t take it any longer.

I glanced up at Phil, but he was quiet. Clearly, he wasn’t in much of a talking mood. He kind of nodded, and I grabbed my backpack and went back to my friends.

My actions that day reminded me just how powerful my words are. They can either build people up or tear them down. As Proverbs 18:21 says, they can bring life or death—and the choice is mine. I made the wrong choice that day. I let my friends influence me way too much. I was afraid of being teased, so I lashed out at Phil. But there’s really no excuse for the way I acted. That afternoon, I promised myself and God that I’d always do my best to use my words in a positive way.

The next time you want to speak out of excitement, anger or a rush of emotions, think of the effect what you are about to say will have on the listener and remember; “Little words spark great fire.”