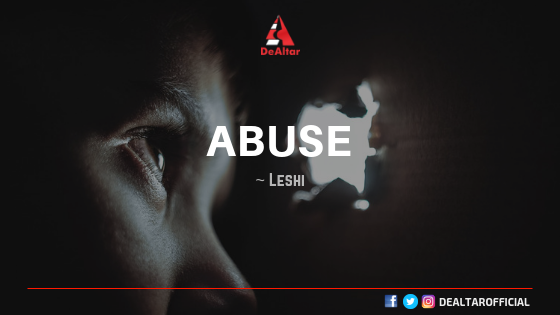 A weird world, no doubt.
It seems like we’re stuck in this lifestyle where abuse is inevitable.
Where being aggressive makes us feel relieved and less burdened.
Where the infliction of pain is the new trend.
Where abuse is becoming a culture.

It’s a world where it is almost impossible for a teenager to live a day without been abused.
This terrible factor termed ‘abuse’ is as common in the world as the stars in the sky. How bad?
Statistics show that 60% of all teenagers around the world are abused yearly.
Isn’t that wow?

Someone might think is that really possible? 60%?
Isn’t that too much and almost unreasonable?
But do you really know what abuse is?
You are probably even an agent of abuse and you don’t know it.

Our understanding of abuse of so blur.
It’s not until you force someone into sex that you abuse.
You can ruin a very bright and glorious future with just terrible words thrown a human.
Did I just hear ehn~ehn?

Check This Out:  Where is God in All These

It’s a world where parents especially have more tendency to abuse their wards and guess what?
They don’t miss the opportunities.
This abuse of a thing has gotten so big that parents have this ideology that until a child is abused, verbally and physically now, he or she will not adhere to instructions or do whatever is supposedly right.

But is that true?

It’s high time we learned to influence people with our words. And I’m sure not talking about stereotyping anyone now but learn to make people do what’s right without abusing them in any manner at all.

This maltreatment, unfairness and unjust way of breeding teenagers is disastrous to their growth as someone who was abused has 90% tendency to abuse others, his children even when he grows up as he thinks and believe that it’s a way of life. Little wonder my society is full of monsters and demons who tag themselves ‘thugs’ and cost others their lives at all essence.

Check This Out:  Trust No One Else But The Anchor By Ashley

‘Abuse’ is a factor that causes much more damage to an individual and the society as a whole than we seem to understand.
It’s not even about who you abuse, it’s about who the abused abuse and the next person who falls victim in the next person’s hand and the cycle goes on like that.

It’s high time parents stopped thinking for teenagers and children as a whole,they sure have their own thoughts,do not ruin it with your harsh words and criticism.

Check This Out:  Is everyone really fine?

Do not make them like you for they tend to be better than you.

And that’s why Kahlil Gibran said;

“Your children are not your children.
They are the sons and daughters of life longing for itself.
They come through you but not from you.
And though they are with you yet they belong not to you
You may give them your love but not your thoughts.
For they have their own thoughts.
You may house their bodies but not their souls.
For their souls dwell in the house of tomorrow ,which you cannot visit ,not even in your dreams.
You may strive to be like them but seek not to make them like you
For life goes not backward nor tarries wirh yesterday “.