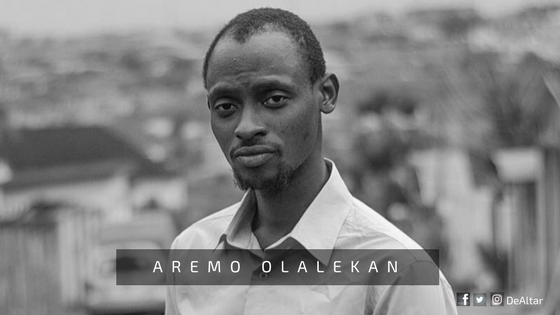 I currently spot a short line somewhere on my face, what you could call a tribal mark, except this wasn’t a tribal mark, it was more like healing mark. I was told I was constantly falling sick and times dying off, so I was taken to my paternal’s place where I got the mark.

Even with the healing mark, I was a faithful monthly attendance register ticker at the hospital the family used. I would always have something to complain of; headache, stomach ache, malaria, and typhoid. There was a period my nose started bleeding for no reason, I could be walking on the road and my nose would begin to bleed. I was such a health wreck! No, my genotype isnt SS, I am actually AS, but sickness seem to be a personal friend of mine.

Looking back now, I discover that there were times I was always looking forward to the hospital time. Why? Well, those seemed like the time when I got everyone’s attention. There’s no one to shout at me to do any chore or such, everyone is trying to find a way to please me. I loved that feeling, so I guess I sorta looked forward to falling ill.

Coupled with the ‘sikey-sicky’ act, I had pronounced ears and long nose. I was called ‘MKO Abiola’ at a point because I shared the big ear resemblance to him. Whenever I had my haircut, this ears where usually pronounced and it becomes the play thing for my young class mates.

Same goes for my pointed nose, but that didn’t bother me as much, it eventually started to when the movie pinochio became popular and friends and families will call me Pinocchio.

I want to start with this defining moment of my life which was set into motion by my father, the one who gave me the Aremo name. There was a time in my life when Sundays nothing close to the ‘sun’ in it for me. Call it ‘moondays’ or ‘tearsday’ and you won’t be far from the truth. For every children who loves church, they do so usually for two reasons, one is that they will get biscuit from the children church and the other is that Sundays are the days you were your ‘Sunday clothes’. The special clothes that are ironed differently. Sunday was the day it usually was unleashed.

My Sunday was close to that. I particularly do not like the Sundays when I have to wear tie, which was almost every Sunday. You see, like I said earlier, I was olodo, how can someone like me learn how to knot a neck tie properly? My father had the answer to that questions.

Check This Out:  The Survivors; Arewa Evelyn Damilola Talabi (3)

Every Sunday he will wait for me to dress up and walk to him for my neck tie to be knotted. He will knot the first time as an example for me, loosen and ask me to try again. I missed it always until one day when he decided, it was either I got it or I got it.

After a series of slaps and knocks, I decided I had had enough. I was going to get this tie and get it over with, I watched my dad’s hands as he knot the tie and I counted, 1…2…3…4…5. I put the five steps in 5 boxes in my head, I missed it at first trial, but I wore the tie I knotted myself to church that day. I was proud of myself, so I really could do something right! That day was like a break through.

I really didn’t tell my dad thank you for this, I eventually did though, many years later, in a written note to him. After that day things got a lot better.

Daddy’s presence didn’t just bring sanity to my fashion, the fear of daddy’s wipe and mummy’s gaze became a driving force for success. I started putting in my best to school work. I moved from large numbers to humbly accepting lesser figures, 11th..7th…4th..3…2… and eventually first. The last day of my primary six was the day I got first, it was the beginning of an academic uplift for me.

Check This Out:  The Overcomers; Temitope Awelewa

I went on to secondary school with this notion. I had found God then and I was running with Him as much as I knew how to. Though I was a forward a few times because of my new found ability, I continued to ensure that I was on the list of the tops in the class.

In a class of over 100, I was amongst the best, I raise my hands to answer questions, covered my book during exams not bothering about anyone. I got a little pompous as I would be finishing the English language teacher’s lines for her as she was teaching. I am grateful this was nipped in the bud quickly. She, Miss Tinubu then, helped me balance my excitement with proper confidence. Pride had no place in my life. I am grateful I had her as a class teacher.

Then my next problem came up…I couldn’t play football.