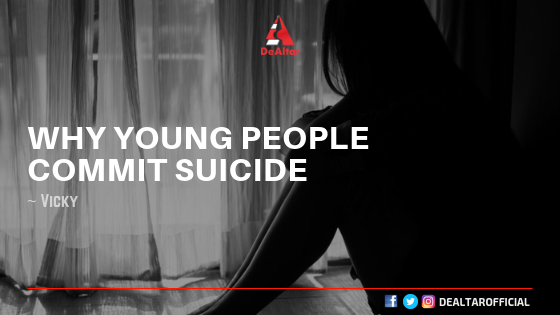 Young people are turning their backs on life because it is becoming overwhelming and frustration is rushing at them.

According to WHO, about 800,000 people commit suicide globally, this proves the death of a person by suicide every 40 seconds. They also reported that suicide is the second leading cause of death among 15-29-year-olds.

Depression which is a leading cause of suicide accounts for 5% of people who eventually commit suicide.

Years ago suicide appeared as a far-away-foreign occurrence but in this time, it cannot be denied that the plague has come home and resides even locally amongst us.

Nigeria ranks top as the 30th most suicide-prone country out of 183 nations in the world.

Why is this life-staking menace prevailing?

A significant number of Nigerians live below the minimum wage of N18,000, and this gives hardship permission to participate in many lives and increases at an alarming rate, chances for suicide.

Check This Out:  Peace In The Storm By Michael Kingsley

The unfavorable economic indices of the country do not make life better for an average Nigerian.

Research evaluation has compiled some reasons for suicide to be because of;

People often attempt suicide solely because of overwhelming pain that surpasses their control. This pain leads to the many reasons why they become convinced to drain life out of their bodies.

Pressure appears in different forms. Ranging from Peer pressure, Academic pressure…  Peer pressure includes social pressure, pressure from friends, peers, and society is often overwhelming and young people are often unable to cope with this stress by themselves, so they resort to withdraw, lose interest and draw ideas that they have nothing to contribute and that the world would be better off without them.

Academic pressure that results from their inability to stay on top academically and knowing that their little efforts are hardly ever appreciated especially by their parents, breeds an unacceptance that gets them frustrated with life and at these points suicide feels like a suitable option.

Check This Out:  The Risk Of Trusting

Traumas are emotional wounds leading to psychological injury. Traumas are soul-scarring., they leave scars on our minds and bodies and are always hard to let go of. A person who has suffered trauma is at risk of suicide. It might not happen immediately after the traumatic incidence but over time, the scars make them rebel against survival.

When a person faces a physical, social or emotional challenge and cannot see a way out or find a glimpse of light in overwhelming darkness, hope loses a chance. And hope is the tiny light we all need to show us the path to a way, to help us hold onto life. And when hope is lost, life doesn’t stand a chance.

Check This Out:  Who Goes First? By Jesufemi

Truth is we all have challenges that we deal with but not all of us wears it as a badge, no one ever puts it up on social media, it seldom is part of an outer appearance yet suicide should never be an option because eventually, it is worse for some people too.

Bottom line is at whatever phase of suicide tendencies, or depression, it is mandatory that we know that we are never alone.

Help is always a friend away! Open up, talk about it, Seek help and find someone to save you if you can’t by yourself. Life is precious. Life is beautiful. Challenges are never enough to steal that beauty cos you are strong. You are beautiful. Say yes to life again, No one ever regrets it. Remember never to forget, you are never alone. #YANA.